Skip to content
HomeDeath of A Popular Athlone First Citizen 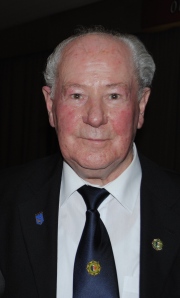 The death of Austin Berry at the end of July brought an end to a political life, which had been previously immersed in the Defence Forces, and Irish traditional music and culture.

He was first elected to Athlone Urban District Council in 1999, when he was 69 years old.  He had an illustrious career behind him as an army sergeant, and an All-Ireland prizewinning musician.

Austin was an Independent politician, and had previously run in the 1991 Local Elections for Westmeath County Council, and the 1994 Athlone Urban District council elections.  He was unsuccessful on both occasions, but in 1994 he was credited with helping other Independents to get elected, while doing a good performance himself.

In the following years, Austin brought up many Athlone issues including health issues for the town, road safety and house repairs.  In 2001, the council was renamed Athlone Town Council. At that time, Fianna Fail had control of the council with five members.  Fine Gael had two, and there was one other Independent, Breffni Rowan, along with Austin.

Austin worked tirelessly throughout those years, and endured personal tragedy, suffering the death of his son, Paddy in a road accident, and his wife Maureen of illness.

When the Local Election of 2004 came up, the tide had changed slightly, and Fianna Fail had started to fall down in the polls.  However there was also an increase in support for Fine Gael, Labour and Sinn Fein, but the Independent support also reached high figures.  Breffni Rowan didn’t go for re-election, so Austin was the only sitting Independent running.  However the competition remained high around him.

Following the first count, Austin’s first preference vote went up slightly, but he also got massive transfers from candidates who lost out, and surplus votes from those who were elected early. Again he came in eighth out of nine councillors. The new councillors were Sinn Fein’s Paul Hogan, and Labour’s Ray Lennon. Fianna Fail’s Frankie Keena surprised everyone by dropping votes, and losing out on Athlone Town Council, although he was elected onto Westmeath County Council on the same day.

The final result was Fianna Fail (4), Fine Gael (2), Labour (1), Sinn Fein (1), and Austin was the only Independent elected. It was apparent that Fianna Fail would find it hard to make up the five required to have an alliance which would give them Mayor.   Within days of the council forming, Fine Gael said that they wouldn’t be part of an alliance with Sinn Fein, which ruled out those three working together for an agreement for Mayor. Or did it?

On the night of the first new council meeting, Austin was proposed for Mayor of Athlone, as was a Fianna Fail candidate. The four FF members voted for their party member, while the Fine Gael, Labour and Sinn Fein members joined Austin in a vote for himself for Mayor.

So therefore he became, surprisingly to some, Mayor of Athlone (2004-2005). He was 74 years old. He did the town proud in the role of Mayor, and appeared on television, radio and in the print media regularly promoting the town, and its business.  Following his Mayoral year, he returned to council work, and took on many local issues.

In 2009, after much consideration, Austin decided not to contest the Local Elections of that year, despite the Independent vote remaining high in opinion polls. He decided that he was ready to retire from politics, considering he had now reached 79 years.

He remained active in public life, releasing an album of mouthorgan music, and writing his autobiography, ‘Stepping Back in Time’. The autobiography was launched by former Minister for Education, Mary O’Rourke at a ceremony in 2012, and it is continuing to sell well in local bookshops.

Sadly, illness took over his life in the early part of this year, and Austin passed away surrounded by his loving family on Monday, July 28th.  He was 83 years old.